I am in the Changi airport in Singapore waiting for my flight. That John Denver song about “You fill up my senses…like a something something something” (my brain is dead) is playing on the speakers…well, at least the Muzak version. Something about that feels a little surreal to me. Particularly when I factor in the music I have been hearing my entire time in Singapore.
Singapore has a definite soundtrack. This did not occur to me until I heard the John Denver Muzak track. I have heard the same music everywhere I go. In every cab…blasting out of every store (except in China Town)…through all the markets. It is the same music, everywhere.

Pop music. Not American Top 40 music, this music that I have been hearing all around me is along those same lines, but not good enough to have made it into the Top 40 somehow. It makes me think of that “we are really big in Asia” joke. I wonder if anything I heard was a David Hasselhoff hit.

This ubiquitous night-club dance beat is what hastened my departure from the walk along the river in Clark’s Quay in fact. It did not break my heart though. Clark’s Quay is really nice in a Disney World kind of way. But I have been to Disney World.

I did see this: 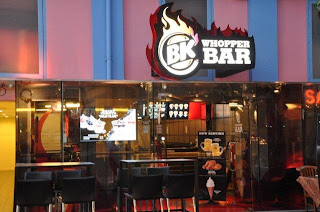 Yep, That is a Burger King Bar.

Now THAT is cool. From an advertising/branding perspective, this makes me giggle. We just don’t cross concepts like this in the states. They are playing loose and fast with their brand here and I kinda dig their moxie. I like how cheeky The Burger King is turning out to be. But that is another story for another day.

Today, once we had finished the video shoot, I took off for Haji Lane near Arab Street. I keep reading everywhere about how this little street is the funky side of Singapore. The second hand shops and alternative styles are supposed to be here. It’s also in a funky district…worth the trip to check it out. And here’s the deal, I am spoiled.

I live in a city with some serious funk in it. Not that Houston is known for its funky edge, but if you walk the curve in Montrose, you know you are on the edge. If you stroll down 19th street in the Heights, the funky vibe, while not as funky as Montrose, has enough going on in their second hand shops alone to qualify the street as a funktion.

We’ve got shops and restaurants in the museum district, the theater district and Washington Avenue that bring a little somethin somethin to Houston, and totally PWN Haji Lane. All this to say that Haji Lane is cute, but I could make a fortune there by just copying a single store along the Westheimer curve and dropping it down right there on Haji Street. If anyone wants to do this, I am willing to sell you my idea for 25% of the profits. I will even help you scout which store in Montrose to steal the concept from.

I don’t like how I think, frankly. Too many years of marketing and advertising. This city is actually quite young as cities go and I can see that in its advertising. I can read their age by their marketing skills like you can read the age of a tree by the circles in the trunk.

But there is plenty they kick our butts in. Plenty. I decided to go into KL right away because I had assumed from what I read and saw that Singapore was going to be antiseptic and boring…or at least, just like Houston. I was wrong.

My favorite thing about this city is its love affair with aesthetic. Our cities look so incredibly utilitarian compared to theirs. Beautiful, dramatic and well cared for trees line the streets. Vines crawl all over the overpasses that are clearly cared for lovingly. So many of the buildings could have easily been constructed in a MUCH more rudimentary way, saving money, but losing the heart of Singapore in the process.

I hope western culture does not overtake this child of a city. Wouldn’t it be cool if this city was allowed to grow up with its imagination and sense of wonder in design intact?