You know those “last straw” moments in movies where the main character has had enough and starts kicking butt? The Batu Caves were my “Hulking out” moment…without the picking up cars part.

Going to the Batu Caves was one of the main reasons I wanted to come to KL in the first place. These are actual caves in the suburbs of KL that were long ago made home to Hindu shrines to the victory of Lord Murugan over the demon Soorapadam. It is a place of Hindu pilgrimage for worshippers in Malaysia, India, Australia and Singapore. Once a year the faithful journey to the shrine in an eight hour arduous procession, climbing the 272 stairs at the end to deliver an offering to Lord Murugan. The beautiful shrine is housed in a cavernous…um…cavern, in a hill. I was dying to see this.

Plus, there are monkeys.

I had read that monkeys are everywhere on the premises. And that, if you are not careful, they will pick your pockets…bare their teeth at you…jump on you…steal things right out of your hands. Goodness, who doesn’t want to see that?

So, my first day here, I began asking how I could get to these caves. I asked several people and they all insisted that a cab ride was required. I really had absolutely no idea where these caves were, so when people started talking money, I have no reason to doubt them…but at 400 ringgits for the trip there and back (that is about $130 American), it was something I had to really think about. As a marker, My beautiful room at the hotel cost less than this for two nights stay. Before spending that kind of money, I decided to explore KL a little bit first, as mentioned in an earlier post.

It is confusing, no doubt. Even getting to the train station is wildly confusing. The maps don’t make sense to me and nothing is very clearly marked. I finally reach the station by listening for the sound of trains and heading in that direction. I go to the booth to get my ticket to the convention center area and then head down to the platform that was pointed out to me. While waiting for the train, I casually look over at the map of all the different lines in the LRT. They have several: 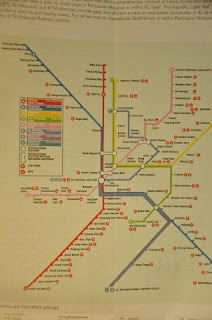 Then I notice this: 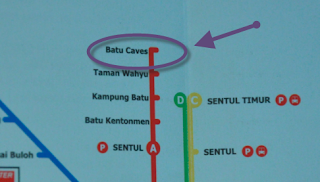 Check what it says at the top of the red train line…Batu Caves.

OK, so I am simultaneously excited and hurt. Not one person I talked to mentioned that the train went to the Batu Caves…not one. So, it appears I can get there easily enough, which is awesome. But now I feel hurt and defensive about all these people who seemed so nice to me.

I know this is crazy. The people I have asked about the caves don’t know me. I am just the latest in a long stream of people from all over the world who have taken holiday from their lives of abundance to tour around the place the place where they live out their lives. I have money, riches in their eyes, and they want it. I get it. I really do. But I still feel hurt. Even as I know it is ridiculous, it makes me sad.

So, as I sit in the KFC train on my way to the KLCC (the entire train is bathed in advertisements for KFC. I do not use the term ‘bathed’ lightly. There is not a surface inside or outside this train that is touting the pleasures of KFC chicken) I begin restructuring my day.

By the time I got to the towers, I was really done with it. Funny that. It was kind of a defiant feeling “oh sure, you want me to go there cause I am a tourist. NO DICE!” After a half-hearted attempt at finding the ticket book…and getting the fish to eat my feet…I was out of there and on my way to the caves.

Ah, but to navigate the trains, that is an adventure unto itself. Multiple lines…transfer stations where different lines come to the same tracks alternately…little clear signage to give you any idea what you are doing…its tricky. I spent the better part of an hour realizing I had, once again, gotten on the wrong train and had to go back to the original station and try again. I asked several times where I was supposed to go and still had trouble. I also asked at these stations if, once I had gotten to Batu Caves station, if I would still need a taxi to get to the caves. For the third time since I discovered there was a station, I was told that, yes, a taxi would be required but that there were plenty at the station. OK, so surely it would be a shorter ride once I got there. Little did I know how short a ride it would be.

Half way through my bumbling through the trip, I noticed a young German girl having a similarly frustrating time. I asked if she was going to Batu Caves and she replied that she was trying. Third time’s the charm and we both found the right train together. We chatted for a bit. She was on an internship in the legal department of some large corporation here. She had just arrived this week. This was her first day out on her own. Then something wonderful happened. Two Iranian students seated behind us began talking with us. They had been there for eight months and had, of course, been to the caves. When I asked how much a cab fare should cost us from the station to the caves, one of them laughed out loud. “Who told you you needed a taxi? The caves are about 50 feet from the station. I think you can probably walk that distance.” Another blow to my trust muscles. She said I should not take it personally. No way to disguise the fact that I am not from around here and many are nice, but ruthless with the tourists when it comes to money.

The station at Batu Caves is tricky, if you are not paying attention, which I was by now. When you disembark, there is a circular drive in front of you, filled with taxis. But, if you walk past them, there is a little hidden gate that walks you straight into the temple area. A five minute walk past stunning icons, statues and devotional monuments gets you to the front gate of the caves, which I imagine…after quite the round about trip, is where you arrive should you hire one of the taxis outside the station.

At this point, I am getting more defiant by the minute. And less trusting. I am not crazy about this development, but I am not all that savvy in places where no one is trying to take advantage of you. I feel increasingly helpless here. And helpless makes me Hulk up. I am not even making friendly eye contact anymore at this point. I am on my own in this city…and it is not going to get the best of me.

Sorry this is so long. I am heart broken at this point. The caves are next…lots of pictures.

1 thought on “My Own Personal Pilgrimage in Malaysia”