The caves were strange, funny, interesting, and magnificent. (WARNING: this is picture heavy.)
This is the first thing you see as you enter the side gate: 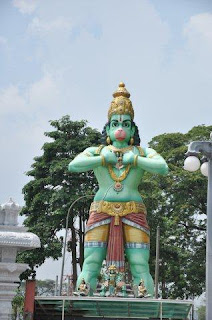 This is Hanuman. You see him first as you enter from the station. Another very good reason to not take the taxi. You could easily miss him altogether and that would be a shame. He is worth seeing.

I think I took nearly 100 pictures here, I will only put a few. But it is a shame to see it piece meal like this.

Here are some pictures of the characters in the epic battle told here. 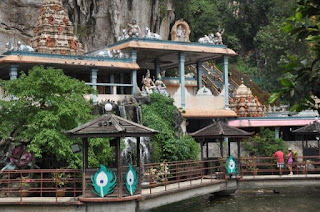 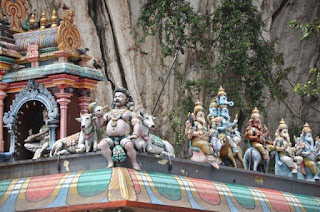 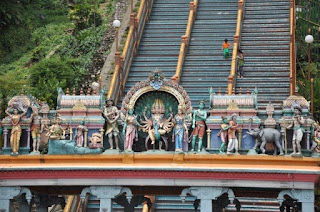 Here are the 272 steps, straight up, to the caves. 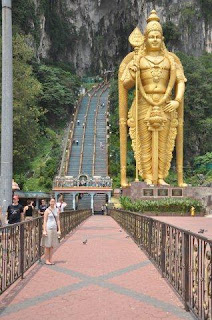 The giant golden statue to the right of the steps is Lord Murugan, the Hindu Diety, proudly standing guard to the temples dedicated to him. And the pictures do not do him justice, of course. He is so imposing that I did not notice the shrine to the left of the entrance until we descended from the caves.

I’m not gonna lie. The walk up was intense. These are not gentle slopping stairs and the hike up is not for the delicate. I went anyway. 🙂 But at the top is an impressive cave, with ceilings 100 meters high and temples and shrines scattered about. There is also, oddly, a substantial souvenir stand. Selling all kinds of shrine souvenirs as well as general KL souvenirs. In this moment, I am kicking myself for not having purchased one of the insane pieces of wall art, featuring any one of the deities represented in the shrine in a plastic frame with lightning bolt lights blinking around them. What was I thinking?

I took lots of pictures. Here are two of them. 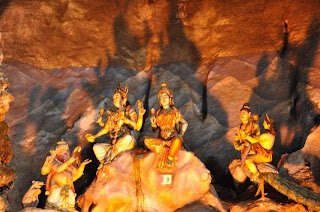 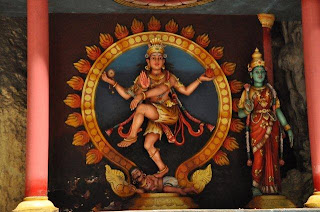 I am dying to know if this is Kali. If she is, she looks quite different than I have seen her represented. But she is clearly standing on a man…

It was at the top of the stairs that I felt a twinge of disappointment. All these beautiful, reverent pieces around and still I am disappointed. Because there were no monkeys. Not one. Perhaps I had come at the wrong time of the day…but I read nothing of this in the descriptions of the place. Perhaps they had been chased away. Perhaps what I had read was old. In any case, I looked and looked and did not see a single one. 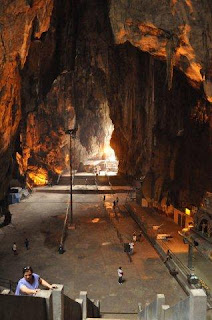 We descended and at the bottom, it began to sprinkle just a bit and we were about to leave when I decided I wanted just one more shot of Lord Murugan. As I began snapping shots, Dorothea, the German student I was exploring with, whispered, “the monkeys.”
I looked up and there they were. Bananas in hand, they sat among the shrines that told the stories and scouted the crowd to see who was the most likely “mark.” I was mesmerized. 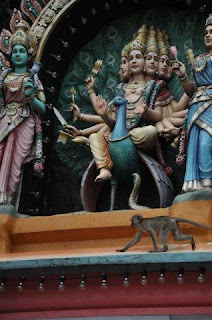 Right above our heads on the entrance to the shrine 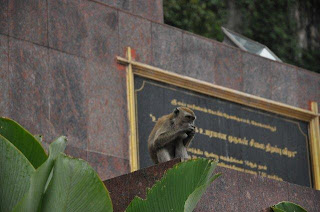 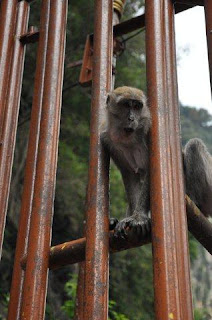 This guy is the madman. Totally bared teeth and went all postal on some poor woman. 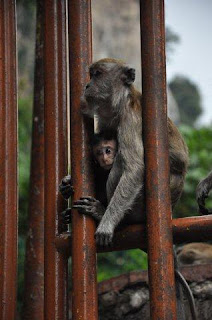 The baby was teeny and the mom was very protective. Very sweet. 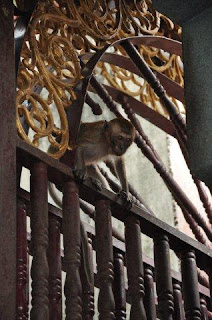 Another tough guy…seconds away from stealing someone’s peanuts.

The trip was full, more than I could have anticipated really. So I was ready to go. The sky had become more threatening, and, to be frank, as cool as it sounded, I was not that excited about going to the bird sanctuary as I had planned. I scoured the map the hotel had given me and found a place called the “Malaysian Craft Cultural Center” which was described as a recreation of a traditional Malaysian village with traditional Malaysian crafts being demonstrated and sold. Why had no one told me of this? I changed my plans. I would head over to this place, despite the threatening weather. I said goodbye to Dorothea, who was heading off to kaoroke with her friends, and set off on my next adventure. Starting in KL Sentral Station.

4 thoughts on “And Batu Caves are Worth the Trouble”