I am in Singapore now. Specifically, I am in the office of the bus terminal at the cruise center…waiting three hours for my bus to leave for Kuala Lumpur. I love how dramatic and adventurous that sounds, but the truth is that I am tired and overwhelmed. I am not feeling adventurous at all, in fact part of me is screaming out to check into the nearest hotel and hide. What I did instead was buy a round trip ticket to KL, sit alone and cry quietly in the bus office and then go downstairs to the food court here to get something to eat. It has been a while since I ate.

Everything smelled delicious…and I recognized almost nothing. Here is what I ended up eating as my first meal in Singapore…in the bus station. 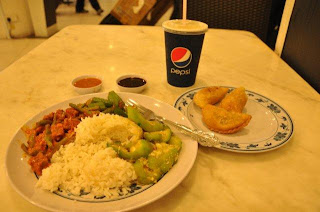 Um, I’ll have rice…okra and green stuff and that stuff that looks spicy and those pastry things and the green colored drink, please.

I recognize the rice and the okra. Even the drink was the “green” one of four different choices, so I don’t know what that was either. As I ate, I begun to relax a little.

I am so conspicuous here. I am completely unaccustomed to standing out so much. This cruise and bus terminal is filled with hundreds of people, and I am the only non-asian person I have seen. Even in the airport, I saw only a handful of people who were anglo. And they are noticing me…big time. I am stared at where ever I go. On a shuttle bus to from terminal 3 to terminal some-other-number in the Changi airport, I was the only one on a bus full of more than fifty people who was not asian. As each person got on, they literally did a double take as they saw me. I had a surreal moment when “Eye of the Tiger” came on the radio and a few of the people looked over at me, like maybe they thought I would start singing or something. Children stare the longest…or at least the most openly. They are adorable, but it is still a very strange feeling.

The plan from here is to get on the bus and ride for five hours to get to KL. There, I will check into the hotel, take a shower for the first time in over two days, and then suck it up and get out there. I may go to the night market (or Pasar Malam) tonight.

I will take pictures and notes along the way. I am bringing you with me.