The screen showing our flight path shows that we are flying over Oslo now. In about two hours we will touch down in Moscow. Tina and the kids are fast asleep (at least, I hope they are), as it is around 1am at home. I have entered a timeless zone, losing time that I will awkwardly regain a week from now on my trip back.

My sleep turned into more of a long nap, unfortunately. I know I will suffer for this later and wish I had brought melatonin or something to ensure more than four hours of sleep on this leg of the flight. There is no point in being awake now.

For seven grand, you can either buy a fairly decent used car or this seat for eighteen hours: 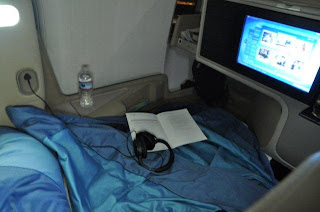 Hard to justify. Fortunately, it is not me paying.

The airport in Moscow surprised me in how well it was cast. If I had been a Hollywood set designer, I would have thought the steel grey and blue décor and dim fluorescent bulbs a little too predictable and 1950s American propaganda filmish. Turns out I had to walk through most of the airport to get to my gate. However, near my gate was, astonishingly, an Irish pub. It was the sole warm and welcoming spot in the otherwise strange surroundings. Here is a shot of my oasis amongst the “Joe Versus the Volcano” surroundings… 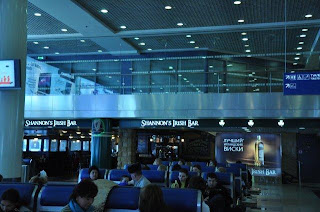 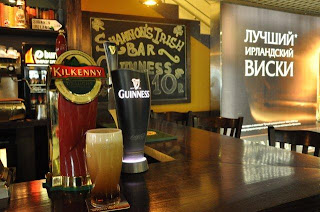 400 rubles later, I was in better shape to board. I didn’t really need a beer, frankly. But drinking a perfectly poured, perfect-temperature ale was a small price to pay to sit amongst warm light and deep brown wood.

Then I woke Tina.

I didn’t mean to. I just texted her so when she woke up in the morning, she would know I was safe. She is apparently a much lighter sleeper when I am not there. 🙂

We texted for a bit while I walked back to my gate. I pulled my camera back out when I saw this magnetic child. 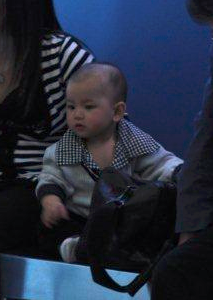 I don’t think this picture does him justice. He was spectacular, frankly. Happy and beautiful.

Next stop is Singapore…then a five hour bus ride to Kuala Lumpur. More from the bus.

P.S. I am working on my photography, bear with me.

2 thoughts on “Flying Into the Future”