The bus ride to KL was surprisingly lovely and restful. While I did not actually sleep, I was whisked by all kinds of rural scenery on the way to KL while I listened to Corinne Bailey Rae on my iPod. Here are some highlights of the bus trip.

Along the side of the expressway 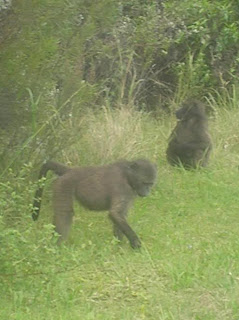 OK, this is not actually a picture I took myself…but I coulda if

But there were truly monkeys in the grass alongside the highway. I yelped when I saw them, as if I am not conspicuous enough. I yelped the entire rest of the trip so that everyone just thought I was crazy instead of retarded. OK, not really…but I wish I had thought of it. 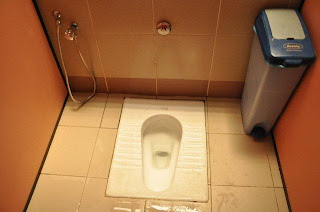 I am not going to go into the details about how this is supposed to work. Let’s just say that I got it wrong…at least I think I did. Wow, TMI even for me. Let’s move along.

By this time, I am feeling MUCH better. I feel calm and ready for the adventure. We had a light rain…lunch on the bus was actually pretty good…I have everything I need…I am off to adventure…PLUS MONKEYS! Right? Then we hit KL.

OK, I truly saw only about 30 minutes worth of the city…so I am SSSSSSSOOOOOOOOO not qualified to say what I am about to say. But, dude, I am pretty much a loose cannon, so here it goes.

Kuala Lumpur is not a happy city.

So, I am sure your mouth just fell open, not from the brilliant and insightful revelation, but from the fact that this should have been patently obvious to me YEARS ago. And, on some level, it was. But the city hit me hard as we drove into it. It is not the clothes hanging out of the windows in virtually every high rise apartment building…it is not the smog that obscures the skyline…it is not even the dour faces. I did not really feel the city until I stepped off the bus. I was happily snapping away bad picture after bad picture. Adjusting F stops and white balance, trying to get a picture of the towers (more on that later). But I stepped off the bus and into a feeding frenzy. Cab drivers and hawkers vying for my attention, and every single one of them, at least the ones located at the intersection where the bus dumped us out, had an intense, hard look in their eyes. I did not select the cab as much as the driver took out the competition by grabbing my bag and piling me into his car.

The driver, whose name I still do not know, even though he told me several times, talked to me constantly…mostly about what a good and reliable driver he is. He showed me pages and pages of his guest book where there were stories of him hunting down a fare and returning the guy’s passport, his wife’s wedding ring and 2,000 lbs. His English is better than my Malay, but only by about ten sentences, and those were wildly difficult to make out. I gave him the paper with the address of my hotel (Frenz Hotel) on it.

By the time we got to the hotel, I was completely over-stimulated. I checked in to the tiny tiny hotel, followed the guy at the desk to my tiny tiny room and face planted right into the bed. Here is my room: 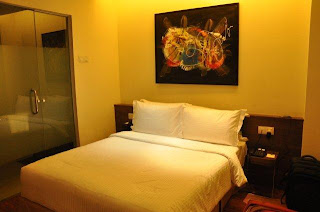 It is tiny, no windows, paper thin walls…and I could not be happier because the bed is ridiculously soft and it feels like a cocoon. Plus, the shower is warm. I got showered and ready to go exploring and could not reach escape velocity. “just a quick little nap” turned into four hours…and I am about to go back down again. It is 10pm here. The adventure will have to begin again in the morning. I have fallen asleep four times while writing this.

P.S. Now it has been nine times. I need to wrap this up. Dang.

6 thoughts on “A bus ride, a cab ride and a face plant”